When her landlord found Kimberly Gail Womack’s nude and lifeless body in the bedroom of her mobile home, sheriff’s deputies told Kathryn Simpson that her mother had slipped in a puddle of chocolate syrup and hit her head.

Following her mother’s cremation, investigators admitted to Kathryn that someone murdered her mom.

Born in Magnolia, Mississippi, September 6, 1959, and growing up in Kentwood, her father’s hometown, Kim Womack, likely never imagined being murdered in Pointe Coupee Parish before her 49th birthday. Kim’s death certificate recorded her cause of death as “blunt force trauma to head by assault” and a “leftsided subdural hematoma” (brain hemorrhage) induced by multiple blows to her skull.

Dr. Alfredo Suarez performed the autopsy on orders from the Deputy Coroner, Dr. Ty Chaney, accomplishing little more than confirming the coroner's initial observations. Dr. Harry Kellerman initially noted “multiple fractured ribs” and “multiple bruises on her upper and lower extremities as well as the mid-frontal region of the face” where dried blood had “emanated from her oral cavity and both nostrils.”

Kathryn Simpson recalled a trail of blood leading from her mother’s kitchen into the bedroom where Kim Womack died.

Days after her mom’s memorial at the Florida Boulevard Baptist Church, the Pointe Coupee Parish Sheriff’s Office phoned Kathryn, asking her to make the drive from her home in Baton Rouge to their office in New Roads. On the road, she felt optimistic, confidant they had scheduled the conference to tell her who killed her mother.

Instead, sheriff’s investigators only told her who didn’t do it. Even today – 12 years after the homicide – the sheriff’s office insists that the man Kim Womack was dating – a married sheriff’s deputy – did not kill her. When the deputy, whom Kathryn says she had known all of her life, dodged her mother’s memorial, she grew suspicious. She asked 18th Judicial District Assistant District Attorney Tony Clayton to share the district attorney’s insights on the case.

“He let me see the information,” Kathryn said, “but I couldn’t get a copy. He said if the contents of the file reached the media, it would ruin the deputy’s life.” He implied to Kathryn that she “will never know” the full story of her mom’s death.

Almost immediately, Kathryn said she went to the office of the deputy’s wife. “I slapped my mom’s picture down in front of her,” she said. “And I asked if she knew the woman in the picture.”

Kathryn said she told the deputy’s wife that Kim Womack had an affair with her husband and that she had taken a road trip with the officer three weeks before she “turned up dead.”

Kathryn described in detail the sheriff’s deputy’s “training event” in Lake Charles and explained how her mother had covertly accompanied him. The deputy’s wife said she would confront her husband that night and call Kathryn the next day.

“I couldn’t wait for the call,” Kathryn said, “I called her the next morning, but she just wished me luck and said she would not be talking to me again.”

Sometime later, an ornate lawn brick appeared on Kathryn’s mother’s doorstep. The sheriff’s office told Kathryn they had found it there, engraved with her mother’s name and the monograms “DFB.” Investigators said they could only guess what the initials represented.

Dr. Kellerman wrote that the sheriff’s office had called him after neighbors reported that Kim Womack had “not been seen for a day or so,” and he described the crime scene this way: “When I arrived, I went into the trailer with a sheriff’s deputy. The trailer was in a state of disarray. A door from bathroom going into bedroom appeared to have been pulled from its hinges. A bedside table in the bedroom was on its side, partially blocking the entrance to bedroom. I stepped over this to get into the bedroom. A totally nude female was lying crosswise across the bed. The decedent showed swelling around lids of eyes and dried blood from the nose and also what appeared to be multiple contusions of all extremities.”

“I did not touch the body, but released to the sheriff’s deputies,” he wrote, “Will treat this as it appeared to be, a homicide until proven otherwise.”

“The sheriff’s office contacted the state police crime lab to investigate this,” he added, “Big help in suspicious deaths.”

Louisiana R.S. 13:5716 states, “If the cremation of a body is requested, the funeral director shall immediately notify the coroner who has jurisdiction in the death. If, after the necessary investigation, the coroner is satisfied that no suspicious circumstances surround the death, he shall issue a permit for cremation. 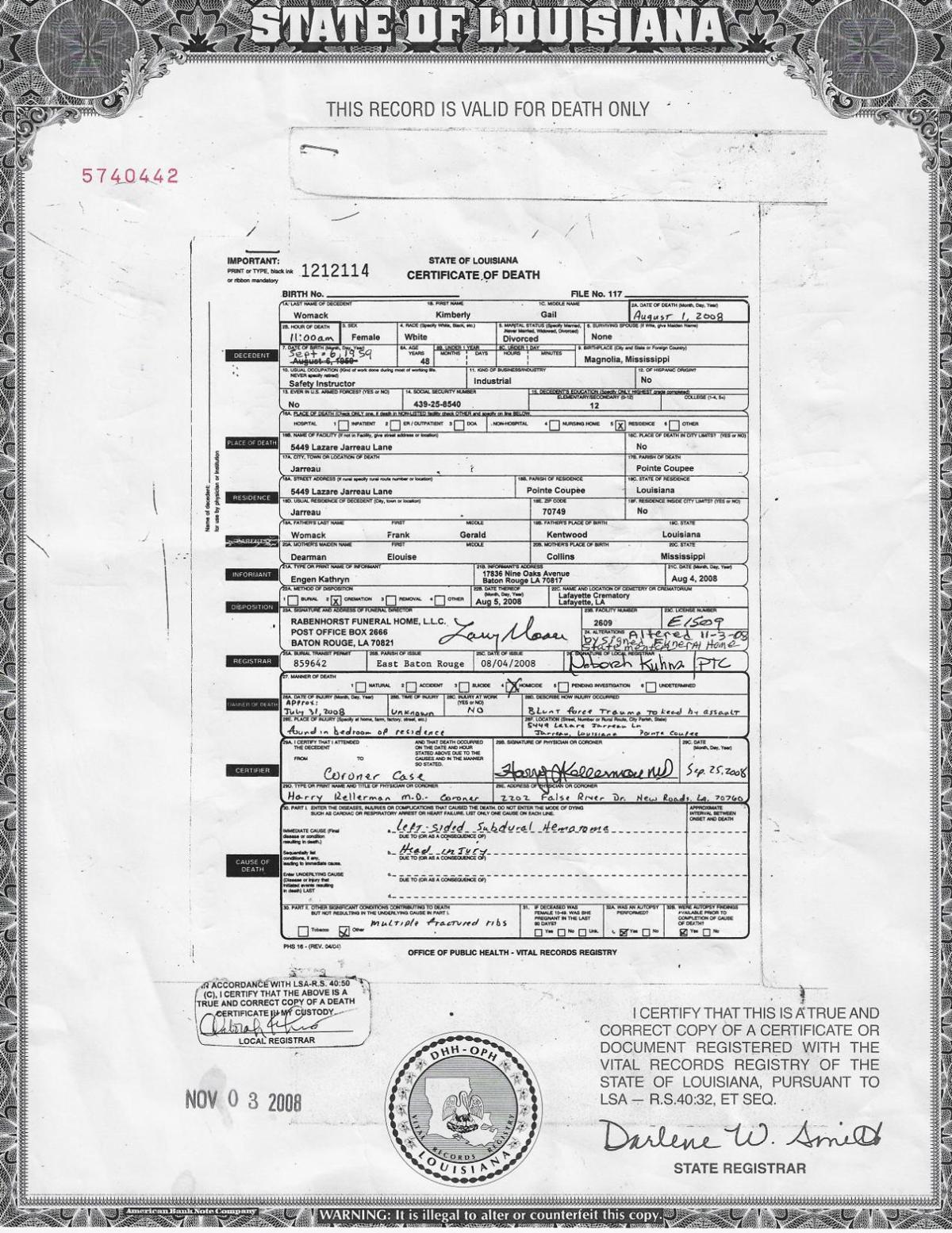 If the investigation reveals suspicious circumstances or the reasonable probability of the commission of a crime, the coroner shall deny the permit.”

Clearly, “suspicious circumstances” are overtly apparent in Kim Womack’s autopsy and coroner’s reports; consequently, in cremating the body, the crematorium destroyed any evidence overlooked by examiners during the autopsy.

Kathryn Simpson has filed a lawsuit hoping to force the Point Coupee Parish Sheriff’s Office to release all records related to her mother’s homicide.

“But I hold nothing against the coroner's office or any of the medical examiners," Kathryn told me, "I believe they did all they could. I just pray they didn't miss anything.”

“Bayou Justice” is a weekly true crime column featuring exciting or notable crime-related stories often focusing on cold case files in South Louisiana; stories based on interviews with key players, among them: police investigators, lawyers, victims, and their families. If you have information regarding this case, contact Crime Stoppers or your local police agency, or email bayoujustice@hammondstar.com.