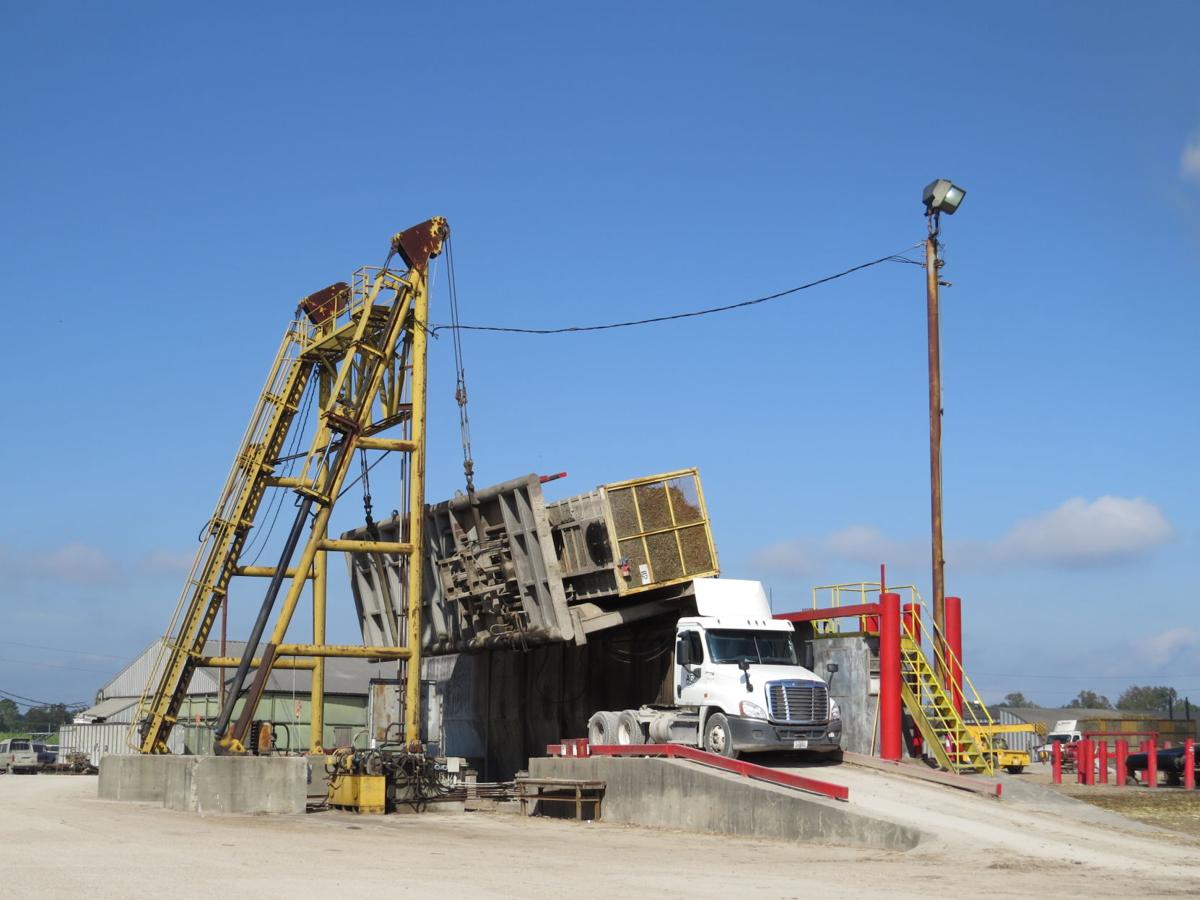 Truck trailers weighing nearly 100,000 pounds of raw cane are emptied by disconnecting the trailer, then dumping it into a pile, which is then transported to the mill for processing. 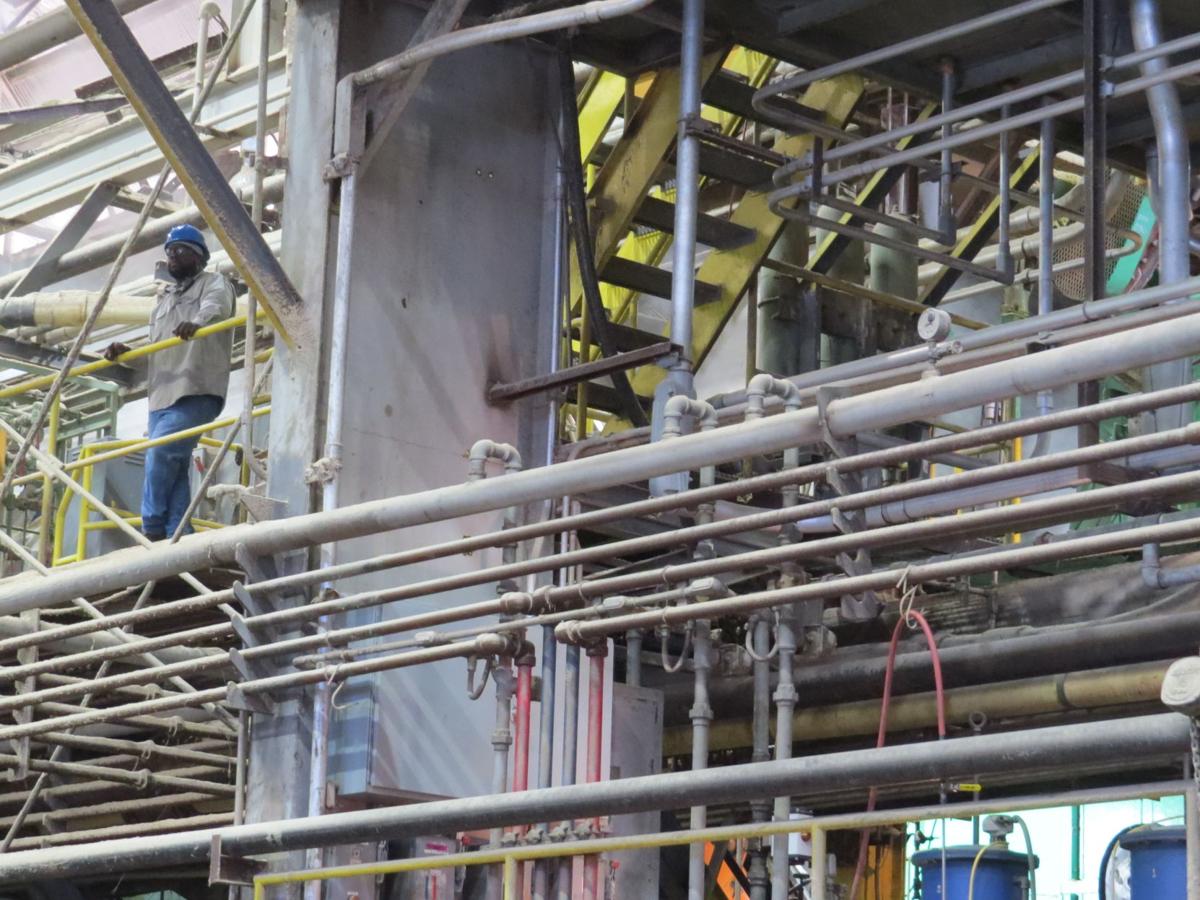 While the pipes and tanks and racks seem to be a convoluted mess, the inner workings of Cora Tex are actually a precise factory processing millions of pounds of raw sugar each season. 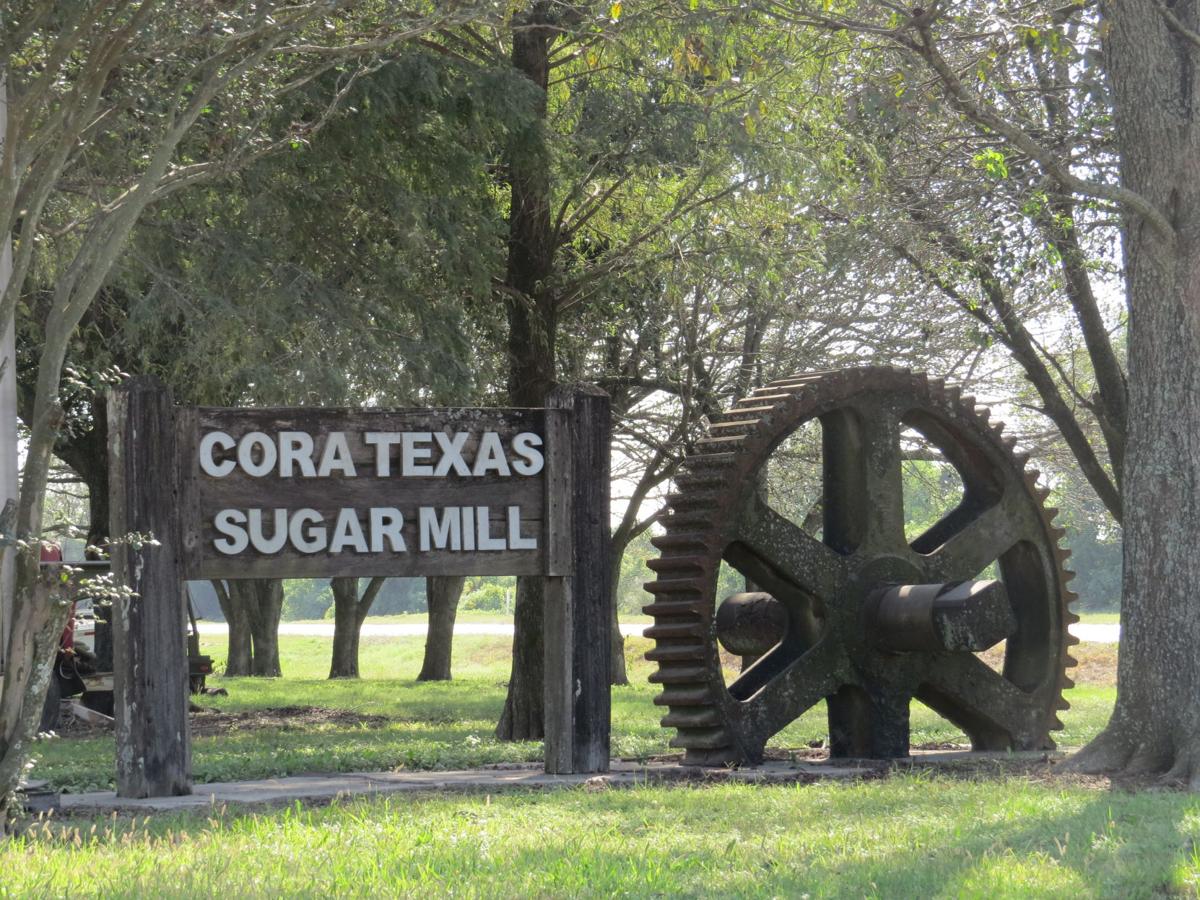 Truck trailers weighing nearly 100,000 pounds of raw cane are emptied by disconnecting the trailer, then dumping it into a pile, which is then transported to the mill for processing.

While the pipes and tanks and racks seem to be a convoluted mess, the inner workings of Cora Tex are actually a precise factory processing millions of pounds of raw sugar each season.

There’s no question sugar cane is the most prolific agricultural product in West Baton Rouge Parish. Almost every road in the parish is lined with its stalks and trucks filled with chopped cane travel throughout the parish day and night.

Those trucks are carrying tons of stalks of cane that are rolling in and out of the sugar mill near White Castle to the tune of 700 trucks a day, enough to keep Cora Texas Manufacturing running 24 hours a day.

Those trucks carry about 18,000 tons of cut cane every day to the plant—commonly referred to as Cora Tex—and the huge, steamy mass of steel, gears, cutters, boilers and other parts of the mill convert each day’s shipments into 4.5 million pounds of raw sugar.

And that’s just what gets run through the plant in 24 hours.

General manager Buckley Kessler says over the course of what they call “the grind,” Cora Tex will have converted 1.6 million tons of cane into 400 million pounds of sugar.

And this is an off year, he said. The last couple of years have seen record sugar cane crops in Louisiana, but Kessler said this year’s crop won’t be anywhere close to a record.

“The weather has everything to do with it,” he said. For the best results, sugar cane needs steady rainfall during the spring and summer and if the right combination of sun and rain come to south Louisiana in September, the weather conditions are in alignment for a record season.

“Were hoping the crop gets better but right now, it’s not looking like it will,” Kessler said.

Comparing this year’s crop to a recent record year shows a dramatic decrease. During the 2017 season, Cora Tex processed 430 million pounds of raw sugar. This year’s crop might make 400 million.

While that may not seem like a big difference when comparing such phenomenally high numbers, it will mean a shorter period of time for the mill to run.

Kessler says the grind will be done in 90 days this year.

“We need this plant to run at least 100 days to have a good year,” he said. “This year, we should be done by Christmas.”

While Cora Tex received just over 125.000 tons of cane last week, Kessler said in a good year that number would’ve been more like 137,000 tons.

“The sugar content is good but the weight of the cane is just not there this season,” Kessler said, adding that in a good year an acre of sugar cane will produce nearly 40 tons, this year’s output is at least three tons short of that.

Cora Tex receives cane from about 50 farmers, many of whom are in West Baton Rouge Parish, and the cane is shipped to the plant in 135 company-owned trucks.

The Kessler family has been in the sugar grinding business since long before Kessler, in his mid-60s, was born.

Located in White Castle, the sugar mill combines the names of the two sugar mills into Cora Texas, the result of the Kessler family buying out the Texas Sugar Mill in 1948. “We’ve been expanding the plant ever since,” Kessler said.

Grinding sugar cane into raw sugar is about all Kessler has ever done, save for the years he spent attending college at Nicholls State University where he earned a bachelor’s degree in business.

While the degree is a logical choice for him to take over the mill’s management when the time came, his father tried to steer him away from what was at the time an unstable business, the economy of scale changed that dramatically in just a few years.

“It wasn’t the business my father was pointing me to because we were a very small factory at the time,” Kessler said.

While there were 40-plus sugar mills in Louisiana when Kessler was a teenager, he remembered, the state is down to 11. Cora Tex is the second largest, he continued.