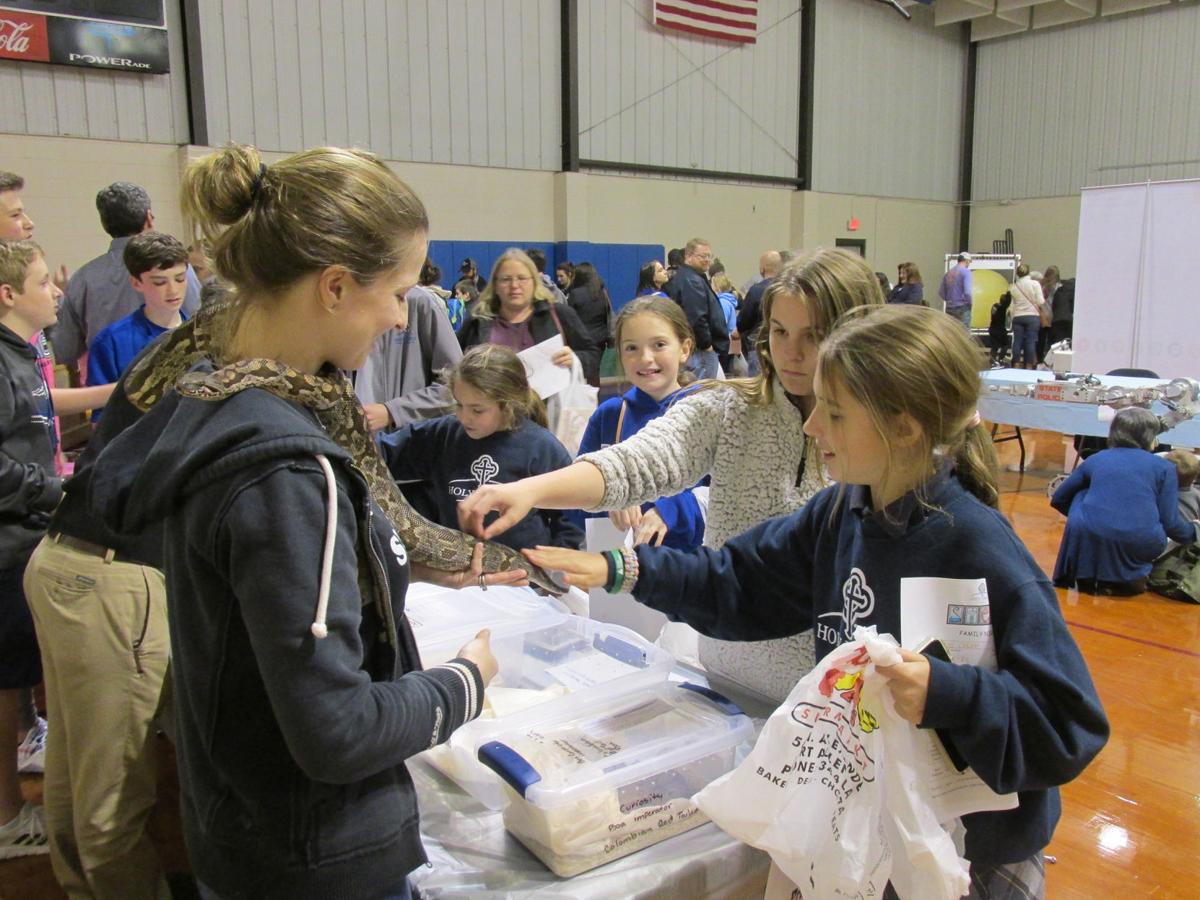 Two young female students fearlessly touch the slimy skin of a Dumeril’s boa constrictor being handled by Heather Fournet while a skeptical student looks on. 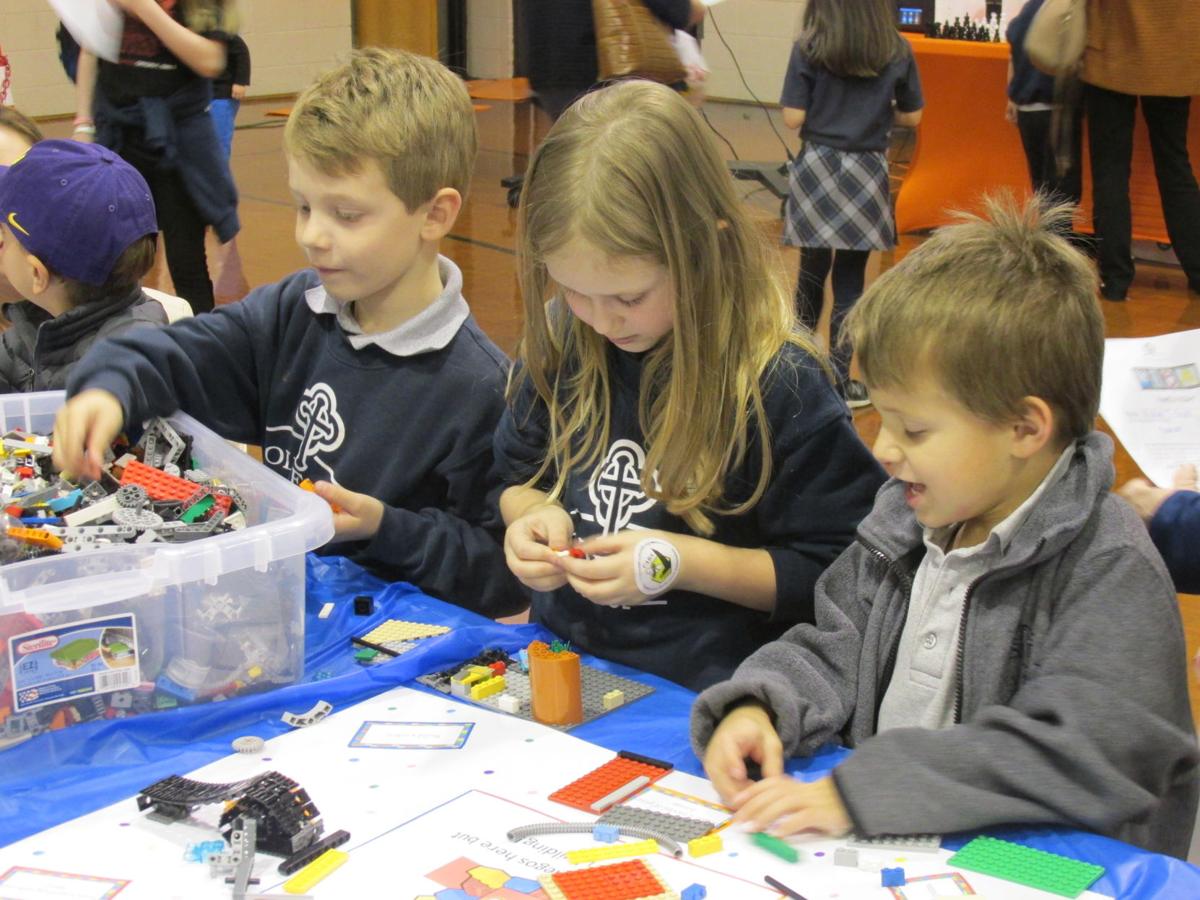 The LEGO booth proved to be a magnet for students at Thursday’s STEM Night at Holy Family School.

Two young female students fearlessly touch the slimy skin of a Dumeril’s boa constrictor being handled by Heather Fournet while a skeptical student looks on.

The LEGO booth proved to be a magnet for students at Thursday’s STEM Night at Holy Family School.

Like moths to a flame, the over 300 students who attended Holy Family School’s STEM Night were attracted to the buzz followed by a flame produced by linemen from Entergy as they demonstrated electricity’s ability to start a fire.

The power company’s demonstration of worn power lines catching a limb on fire, as it would during a storm, was the most popular of the night’s 21 booths, but there were others that attracted large crowds.

One was the demonstration of flying drones the students were able to control themselves and—completely unrelated to the STEM theme, science, technology, engineering and technology (STEM)—were also big draws.

Annie Cagle, the school’s technology director, hosts the program to expose students to career opportunities in those fields they might not otherwise know about.

“I want them to learn that the stuff that the learn in the classroom has everyday, real applications in their future,” she said. “I also want them to see a variety of different STEM careers that are an option for their future.”

Cagle said it’s an added bonus that many of the booths are manned by a parent. “For them to see what Mom and Dad do every day is a neat aspect to it.”

She continued by saying every year has some of the same booths, usually the most popular.

“Each year, though, I also try to add some new ones,” Cagle said.

Oddly, because of its lack of context in a STEM demonstration, the snake display allowing students to get up close and personal, even touch if they dared, was one of this year’s most popular attractions.

Cagle said she was reluctant to bring in the snakes because she wasn’t sure of how the school’s young students would react, “but I actually had a lot of positive feedback on them.”

“I think the kids like the hands-on activities the best,” she said, although the Entergy demonstration, strictly a hands-off display, is a crowd favorite.

“Entergy is always one of the kids’ favorite ones because they get to watch the sparks and see the fire,” Cagle said.

Another well-received demonstration is hosted by a 3-D printer distributor.

“The company’s representative created an incredible map out of what he called trash cardboard in an hour,” said Annette Fitzgerald, the school's advancement director. “It was hard to believe, it was so intricate.”

Not only were the students impressed with the 21st century printers, but so were administrators at the school. Holy Family now has two of the printers of its own.

“The kids were thinking, ‘I’m creative, I’m artistic, so maybe there’s a career like this out there for me,” Fitzgerald said.

When students enter the Activity Center the night of the STEM demonstrations, Cagle said, they are given what could be described as a passport/map. They are required to visit at least 10 of the displays, where the representative there stamps them as proof they were there.

Cagle was pleased with the attendance, which included “a lot of parents who were very involved themselves,” she said.

“What with the weather being what it was, rainy and cold, you could easily see why this would be a good reason for folks not to come out so the fact that so many did is is a true testament to what Annie does with STEM Night,” Fitzgerald said.

“We’re already looking at dates for next year’s STEM Night and some of the participants from this year have asked if they could return,” Cagle said. “It’s a good time for everybody.”