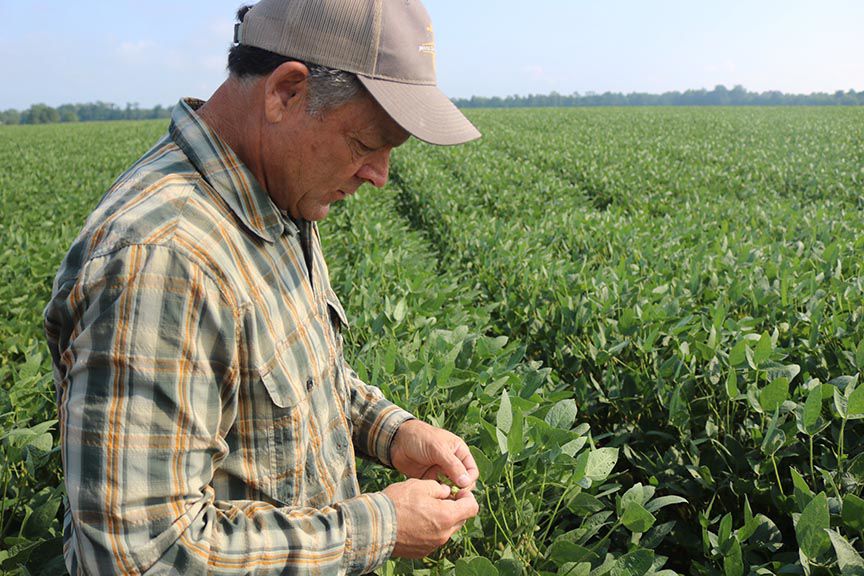 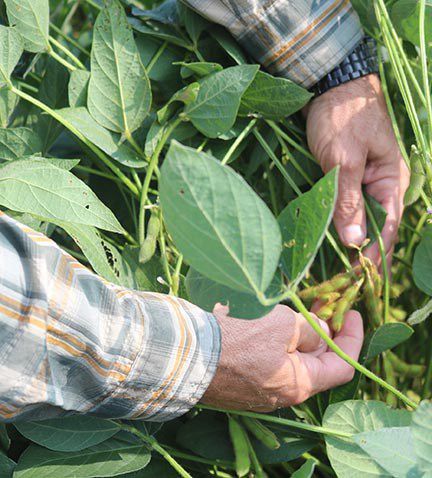 Donald Schexnayder owns Schexnayder and Sons with two of his brothers. He peels a soybean, a crop responsible for about half of the profits of the family farming business, as he explains the dips in the market and his trust in President Donald Trump.

Donald Schexnayder owns Schexnayder and Sons with two of his brothers. He peels a soybean, a crop responsible for about half of the profits of the family farming business, as he explains the dips in the market and his trust in President Donald Trump.

The ongoing trade war has the potential to severely impact the bottom line at Schexnayder and Sons in Erwinville , but Donald Schexnayder is trusting President Donald Trump’s process in putting America first.

Soybeans make up about half of the profits at Schexnayder and Sons, the rest coming from wheat, corn and oats. Some of their business comes from bagging and selling a portion of their product for individual sale as deer feed, but most of their profits come from exporting goods.

At just the threat of a tariff war earlier in the year, farmers saw the price of soybeans drop 20 percent. A 20 percent cut off the top of profits is concerning, especially when expenses are stagnant or increasing, Schexnayder said.

“But as far as what we think Trump is doing a good job, bad job, or whatever, we don’t know his information,” he said. “He has the knowledge of being in business, running his own business, making big decisions, so we’re trusting that it’s his strategy, his plan.”

A dip in market prices isn’t a cause for concern yet, Schexnayder said. However, a long-term drop could mean China has moved on to its next biggest supplier of soybeans, Brazil. Market prices and weather are the two most significant variables farmers face, both of which Schexnayder monitors daily.

A screen in the corner of the office updates continuously, and when Donald sees a price he likes, he makes a call. He makes calls throughout the year when prices are high and low to maintain a steady average. He’s used to seeing dips in the market just like he’s used to seeing years with too much or too little rain. Price drops happen, but a shift in the market share is cause for a scare.

“If they get in the habit of buying from Brazil, they may just stay over there, and that’s the really scary part,” Schexnayder said.

Instead of focusing on the potential loss of the Chinese market, Schexnayder preferred to talk about other markets opening up and mitigating the damage.

“It would cut down on some of the exports going on, of course, but they might open up other markets,” he said. “We may be able to send the same amount to export but to different locations.”

Earlier this month, President Trump announced a $12 billion bailout for farmers to ease economic fallout from the trade war. The controversial plan includes direct payments to soybean farmers impacted by increased tariffs from abroad. While he doesn’t want to have to rely on funds from the bailout, the assistance would be welcomed, Schexnayder said.

The trade war has a broad impact, going beyond just the market prices of goods. Tariffs on steel and aluminum increased the cost of equipment for farmers across the nation, but Schexnayder said those effects have yet to hit Schexnayder and Sons. He’s also preparing for tariffs on chemicals commonly used in farming.

Further, agriculture isn’t the only area hit by tariffs. Countries are strategically increasing taxes on quintessential American goods like blue jeans, bourbon, Harley Davidsons, pork, ketchup, and chocolate. However, as long as the plan is to keep America first, Schexnayder is willing to take a hit–for a little while, at least.

“[President Trump] just says something and everybody reacts, but he may be saying it, so everybody reacts so he can compromise or work on the deal–that’s our hopes,” he said.

The theft of American intellectual property is at the heart of the trade war, and is something America can’t let go unattended, Schexnayder said.

“I’m sure he didn’t wake up and think we need to make a tariff, but the intellectual property and trying to steal it, he needs to stop that, and this is one way of trying to do that,” he said.