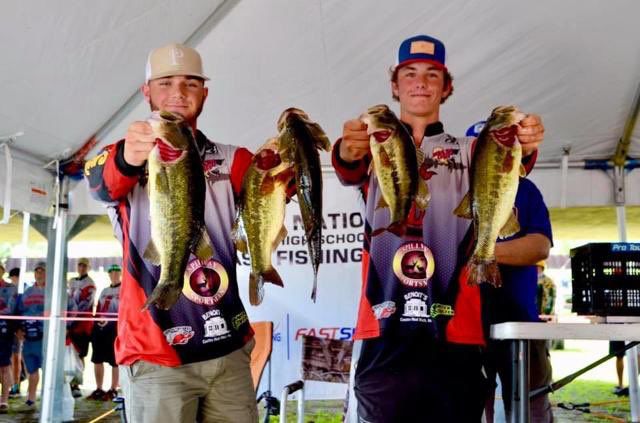 In addition to members of the track team, as well as the softball squad, Brusly can add two more state champions to the mix.

The championship was held May 5. The event was originally scheduled for Saturday, May 4, but was postponed because of severe weather.

“What helped Mike and Greg was their mindset,” said Brusly fishing coach Brent Bonadona. “They were seniors and instead of just going for points, they were about swinging for the fences and it worked out for them.”

Bonadona and Diamond were awarded a $500 scholarship, a plaque, and a complimentary rod and reel.

The state champs were not the only members of the team representing Brusly. Four other two-person teams from Brusly competed in the event.

Emily Denicola and Chance Bizette finished 33rd with a weight of 7.09 pounds. Carson Granier and Trent Labauve hauled in 7.03 pounds.The team of Michael Sanchez and Dylan Eschette and the duo of Trent Tullier and Dax Delapasse each finished with a total weight of 6.92 pounds.

Michael Bonadona and Diamond qualified to compete in the Mossy Oak Fishing High School Championship presented by Academy Sports + Outdoors on Aug. 8 through 10 on Kentucky Lake in Paris, Tenn.

Sanchez and Eschette also qualified for the national tournament.

“In the three years since we’ve had a team, it has just gotten bigger,” Brent Bonadona said. “I think it just goes to show hard work pays off. All three years we’ve sent one team to nationals. This year we’re sending two.”

The Brusly fishing team was also selected as the team of the year.