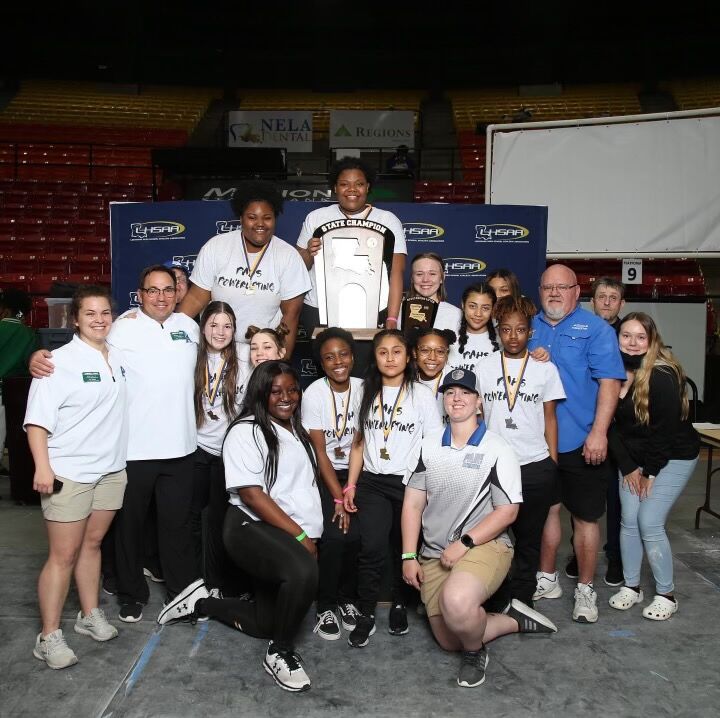 Port Allen's Keren Santos was named the Outstanding Lifter in 2A.

Port Allen's Keren Santos was named the Outstanding Lifter in 2A.

MONROE – The Port Allen girls powerlifting team made up for last year’s misfortune.

One year after the onset of the pandemic forced cancellation of the state powerlifting meet and denied a championship to the No. 1 contending Lady Pelicans, Port Allen made certain to finish the job from last season.

“The best way I could put it was that last seniors didn’t get an opportunity to lift, so we dedicated this one to our seniors from last year,” Port Allen head coach Brian Bizette said.

The majority of the squad consisted of freshmen and sophomores, which likely caught opposing teams off-guard, Bizette said.

“We’re so young, it’s unreal,” he said. “This was their first year ever being exposed to the word ‘powerlifting’ and once they saw the results, they had the gratification of seeing the results from their hard work.”

While the strength played an obvious role, another element stood out for the 2021 Lady Pelicans, Bizette said.

“A lot of this was because of character,” he said. When you have kids who come in and work hard, and you don’t have to preach to them about lifting, it’s a big help

“When I’d walk into the weight room, I’d hear weights clattering,” Bizette said. “They were all about business.”

The “business” also included the opportunity to ensure the program would not be denied the championship after last year’s cancellation.

“It was horrible last year … one year we were going to win the state title and the next week was canceled,” said Frank, who will graduate in May. “It only made us work harder to prove ourselves this year.”

The senior lifters last year did not get to see the benefits of their hard work.

“That’s a lot of what motivated us this year,” she said. “We may have won the championship this year, but this year’s win was dedicated to last year’s seniors – this win was for them.”

There’s also a sense of gratitude to the current seniors, said Murphy, who will head into her final season next year.

“I would like to give a big thanks to Summer and Alexis, who have pushed me and motivated me,” she said. “I’ve spent three years with Summer and two years with Alexis, and they have really been keeping me going with the sport of powerlifting.

“Summer was the only senior on this year’s team, and I’d like to thank her for being such a good leader to me and this team.”